Some events really grip you and have you returning every year. Marmot Dark Mountains is one of those. Max and I have been competing as a pair for several years now but this year I reluctantly gave up my place due to a stress fracture to my shin that needed to heal. Having successfully returned to running ½ a month earlier than expected and my replacement suffering with a similar condition, I was able to step back in and we were able to continue our MDM streak. Having been out for so long it was just fantastic to be out again in the hills with Max; we work really well together, never argue and rarely get grumpy despite the duration of these events… when we do get grumpy the other person fills them with sugar or insists they put on another layer, depending upon the source of the grump. Knowing your partner in these events in crucial… especially in an area like the Forest of Bowland where the tussocks are man eaters and the bogs and grips will have you up to your neck.

This year due to my return we changed to the short score class, a mere 8 hours long – the logic being that if there were any problems we could return to base or just walk our way around instead and temper our ambition. I certainly didn’t want to go back to square one with my shin. The last minute change meant we started last. Initial annoyance at this soon parted to delight as we realised we could turn up, register having eaten enough fish and chips to put ourselves in a food coma, and then go for a few hours sleep in the van. Thus we started with at least 2 hours sleep in the tank which was a huge luxury. 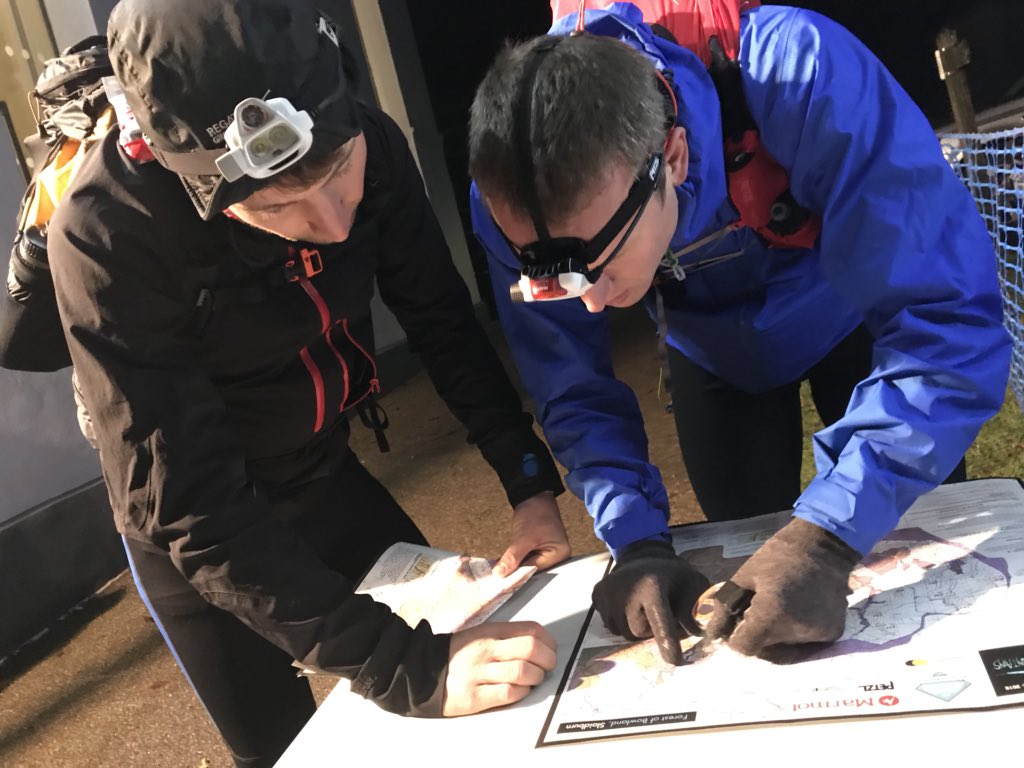 Feeling the pace on the initial run out it still took us 30 minutes to reach the terrain we were going to face for the evening. Difficult was a huge understatement. Tussocks, heather, bogs, random holes… you name it, it’s there! Our route took in three controls before heading East and, in hindsight, gave us the most practical view of how to run the terrain. In many of these events, the straight line is picked, but here we needed to be smart about using paths which were longer, but an order of magnitude quicker. One particular crossing stuck in my mind. Having crossed through into a complex area with defined fences and crossings we found ourselves shimmying across a well weathered board, holding onto a fence for hand holds to cross around 5 metres of a bog that probably would have been neck deep… thankfully after that there was a trod that was really quick and took us down to a manned check point.

An event should be judged on the civility as well as the challenge, so being offered a shot of port at this check point by a very good friend of ours certainly ticked that box. It provided a warmth to our spirits and our bodies as we proceeded to hoover up points and be smart about leaving other points on the course as they would have eaten up huge amounts of time for little reward. We picked up a tale at this point and were followed for 3 check points. In a night event this is a hazard as your torches give you away. It’s really frustrating to be doing all the Nav. The clag came in and we made an error at one check point having headed off too far to the right to hit the check point. We realised this relatively quickly and lost probably 10-15 minutes overall, so not a huge problem. This error allowed us to confirm our tail though as they immediately turned around after asking us if we’d found the control. If they had continued looking for it then fair enough, but they literally followed us and pretended to adjust kit, look at the map, tie shoelaces, etc. Poor form. A little pat on the shoulder and a pointed comment to confirm that we knew what they were doing meant we were able to lose the tail on the next section and get on with finishing up the night.

Coming into our final cluster of controls the weather got considerably worse. Based upon the map we expected pure hell, but were pleasantly surprised to hit the first control very quickly, then the second… three, possibly five to go! Alas the ground between us and the next control was just hellish. Knee to thigh high heather, random holes, tussocks, a serious side wind and the worst rain of the night, low energy and Max was getting dangerously cold due to an old (no longer) water proof. We fought our way around focused on finding shelter so Max could get his primaloft and water proof trousers on. Looking back now I realise that the point where I almost fell down the steep side we were contouring on (the ground gave way due to water and poor foot placement) was the re-entrant we were looking for, but it was far less pronounced than the map suggested. It was worth 25 points. As max put on his gear I re-assessed the map and we decided to keep going. We’d either hit the control or we’d hit the next control. We’d been 20 m too low and I’d simply not looked up.

We nailed the next control, dropped down to bag a 50 pointer and had started back hoping to bag a 20 pointer in the re-entrant between us and the finish. The run out on the road to the course had taken 30 minutes and we had the aim to hit the road with roughly 30 minutes to go to get back. Before we’d even got to the top of the hill we were at T-minus 30 and were clearly going to hit penalty points. Having dropped to pick up 50 points rather than play it safe, our mission now was to get back without losing more than 50…. But since it meant an easy 20 going begging we wanted to make that less than 30. In the end we lost 7. Job done.

All in all it was a fantastic and unexpected return to the hills. Once again, Max and I had worked really well as a team… and once again we’d ended up as the bridesmaid rather than the bride. Having made the 10 minute mistake we’d ended up just under 7 minutes over time and lost 7 points and probably the 20 pointer in the final re-entrant. The weather coming in on us and missing that 25 point control had also knocked points. We scored 463 points and the winning team was 495 – 463 + 7 + 25 equals…. Curses. Of course that’s not a fair reflection of the errors the other teams above us had made and what could have been for them. Whilst there were a number of other places we could have picked up the minutes we’d needed, there is no point in dwelling on what could have been. We‘d had a fantastic night out on the hills and have already entered our next mountain marathon (albeit a mini one – 4 hours long) which is on Sunday in Bethesda if anybody is interested. Come and have a go, it’s a fantastic escape.

View all posts by Chris Baynham-Hughes